The Body of St. Joseph. 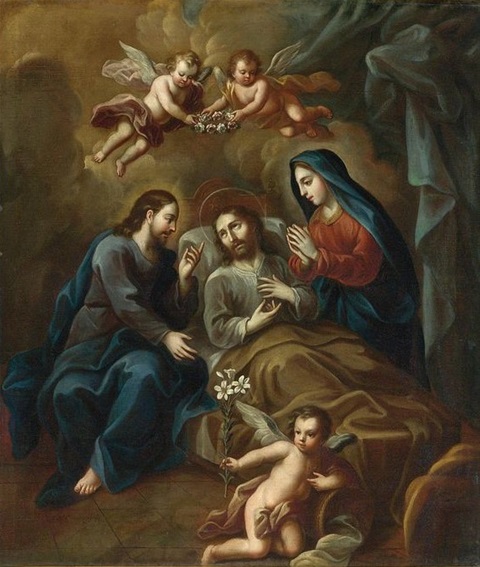 “God will draw aside the veil, which has hitherto prevented us from seeing the wondrous sanctuary of Joseph's soul”
(La gloire de saint Joseph, 1645)

The faithful man shall be much praised, and he that is the guardian of the Lord, shall be glorified.
(Divine Office, March 19th. Little Chapter)

1. Anne Catherine Emmerich: “When Joseph was dying, Mary sat at the head of his bed, holding him in her arms. Jesus stood just below her near Joseph’s breast. The whole room was brilliant with light and full of angels. After his death, his hands were crossed on his breast, he was wrapped from head to foot in a white winding sheet, laid in a narrow casket, and placed in a very beautiful tomb, the gift of a good man. Only a few men followed the coffin with Jesus and Mary; but I saw it accompanied by angels and environed with light. Joseph’s remains were afterward removed by the Christians to Bethlehem, and interred. I think I can still see him lying there incorrupt.”

2. Father Paul said to a person from Oostcamp, “In an ecstasy, a saint has seen the body of St. Joseph preserved intact in a tomb, the site of which is yet unknown. The more the glorious Spouse of the most Blessed Virgin is honored, the sooner will the finding of his body take place, which will be a day of great joy for the Church.”

3. In a book published in the year 1645, we find these almost prophetic words:

“O thou bright sun, thou father of our days! speed thy onward course, and give us that happy day, whereon are to be fulfilled the prophecies of the Saints. They have said, that in the latter ages of the world, the glories of St. Joseph will be brought to light; that God will draw aside the veil, which has hitherto prevented us from seeing the wondrous sanctuary of Joseph's soul; that the Holy Ghost will inspire the Faithful to proclaim the praises of this admirable Saint, and to build Monasteries, Churches and Altars in his honour; that, throughout the entire kingdom of the Church Militant, he shall be considered as the special Protector, for he was the Protector of the very founder of that kingdom, namely, our Lord Jesus Christ; that the Sovereign Pontiffs will, by a secret impulse from heaven, ordain that the Feast of this great Patriarch be solemnly celebrated through the length and breadth of the spiritual domain of St. Peter; that the most learned men of the world will use their talents in studying the divine gifts hidden in St. Joseph, and that they will find in him treasures of grace incomparably more precious and plentiful, than were possessed by every the choicest of the elect of the Old Testament, during the whole four thousand years of its duration.” (La gloire de saint Joseph; par le P. Jean Jacquinot, de la Compagnie de Jesus. Dijon: 1645.)

St Joseph, renowned offspring of David, pray for us.